As previously mentioned, the start of the day was very early, and we set off for Jansenville, this time to pick up 2 two oven AGA’s from a farm – Teasdale. The farmer here has often been under great pressure with outbreaks of avian flu, so life down here is tough.

There is no real rush to get to this farm, although we would rue this decision later! We headed into Graaf-Reinet. This is a beautiful town, and after 200 years, has much history attached to it. Emmie kindly decided to take us to look at the ‘Valley of Desolation’, situated in the Camdeboo National Park. If you are ever in this area, to look, be and feel this is a must. It is deadly quiet at the top of this valley, no birds, no insects, just incredible silence. There is the view too, of course, a geological phenomenon of great dolerite colums, rising some 120 metres from the floor of the valley, like some 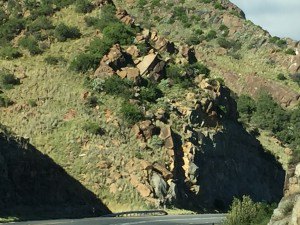 to reach the sun. Simply stunning. The plants along the edges of the trail have been well marked with both botanical and common names. It was a pity that a fire had obviously raged through the area a short time before, 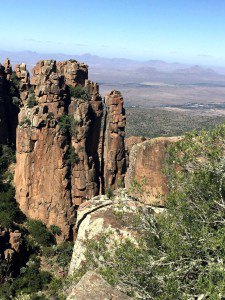 leaving only unrecognisable, blackened twigs of most of them. There are many places to stay in the Graaf-Reinet area and the range is from camping to the Drostdy Hotel, built in 1806 and designed by famous French architect Louis Thibault as the ‘Drostdy’ or Magistrate’s Court of the district.

Work calls and we continue on to Jansenville. We haven’t booked into any accommodation yet so we feel a bit insecure. Rightly so too, as we phone each and every place on our list, only to be told that the Auditor General and entourage are busy in the area and that there is no one who can assist us. Finally we find a room for our worker and another place for ourselves. This achieved, we travel on to the farm. What wonderful people. It about 300 degrees in the shade, of which there is none, and we set about dismantling one of the AGA’s while the workers on the farm and Freedom, wrestle the other one from its moorings in the old kitchen, now being refurbished. Freedom and I are being burnt to a cinder in the blazing heat, and the stove is made of cast iron, so everything we touch is blisteringly hot. Finally, give or take a few swear words, the complete one is loaded on the trailer and the other one is loaded bit by bit into the bin of the bakkie. It’s apparently only 41 degrees today and that is regarded as cool! My skin certainly didn’t agree with that….then off to our accommodation.

Mosquitoes!!! This town, I swear, is run by mosquitoes. You can’t move without hordes of them following you…thank goodness for Doom mosquito mats…at least that cuts the population down by half! Jansenville is not a place one would spend the night in. I think one would be better off going back to Graaf-Reinet. It’s also not the place to learn to drive. The young lady who was being given her first driving lesson, at the place we were staying, I think would agree. The vehicle was virtually unscathed, but the wall and the young lady’s nerves were quite the worse for wear.

And so to bed, totally exhausted. 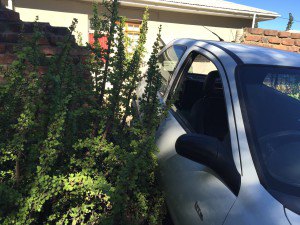